Nebulizer – From Wikipedia, the free encyclopedia

Source: Nebulizer – From Wikipedia, the free encyclopedia In medicine, a nebuliser[1] or nebulizer[2] (see spelling differences) is a drug delivery device used to administer medication in the form of a mist inhaled into the lungs. Nebulizers are commonly used for the treatment of cystic fibrosis, asthma, COPD and other respiratory diseases or disorders. Analytical nebulizers are another form of nebulizer and are used primarily in laboratory settings for elemental analysis. Nebulizers u...

In medicine, a nebuliser[1] or nebulizer[2] (see spelling differences) is a drug delivery device used to administer medication in the form of a mist inhaled into the lungs.

Nebulizers are commonly used for the treatment of cystic fibrosis, asthma, COPD and other respiratory diseases or disorders.

Analytical nebulizers are another form of nebulizer and are used primarily in laboratory settings for elemental analysis.

Nebulizers use oxygen, compressed air or ultrasonic power to break up solutions and suspensions into small aerosol droplets that can be directly inhaled from the mouthpiece of the device. The definition of an aerosol is a “mixture of gas and liquid particles.”

Various asthma guidelines, such as the Global Initiative for Asthma Guidelines [GINA], the British Guidelines on the management of Asthma, The Canadian Pediatric Asthma Consensus Guidelines, and United States Guidelines for Diagnosis and Treatment of Asthma each recommend metered dose inhalers in place of nebulizer-delivered therapies.[3] The European Respiratory Society acknowledge that although nebulizers are used in hospitals and at home they suggest much of this use may not be evidence-based.[4]

Recent evidence show that nebulizers are no more effective than metered-dose inhalers (MDIs) with spacers and that MDIs may offer advantages in children with acute asthma.[3][5][needs update][6]Those findings refer specifically to the treatment of asthma and not to the efficacy of nebulisers generally, as for COPD for example. For COPD, especially when assessing exacerbations or lung attacks , evidence shows no benefit from MDIs over nebulizers. [7]

European Respiratory Society highlighted a risk relating to droplet size reproducibility caused by selling nebulizer devices separately from nebulized solution. They found this practice could vary droplet size 10-fold or more by changing from an inefficient nebulizer system to a highly efficient one.[4][5] Two advantages attributed to nebulizers, compared to MDIs with spacers (inhalers), were their ability to deliver larger dosages at a faster rate, especially in acute asthma; however, recent data suggests actual lung deposition rates are the same. In addition, another trial found that a MDI (with spacer) had a lower required dose for clinical result compared to a nebulizer (see Clark, et al. other references).[3]

The lung deposition characteristics and efficacy of an aerosol depend largely on the particle or droplet size. Generally, the smaller the particle the greater its chance of peripheral penetration and retention. However, for very fine particles below 0.5 µm in diameter there is a chance of avoiding deposition altogether and being exhaled. In 1966 the Task Group on Lung Dynamics, concerned mainly with the hazards of inhalation of environmental toxins, proposed a model for deposition of particles in the lung. This suggested that particles of more than 10 µm in diameter are most likely to deposit in the mouth and throat, for those of 5–10 µm diameter a transition from mouth to airway deposition occurs, and particles smaller than 5 µm in diameter deposit more frequently in the lower airways and are appropriate for pharmaceutical aerosols.[8] 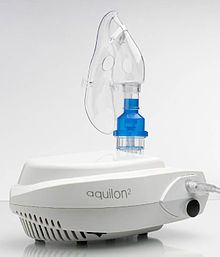 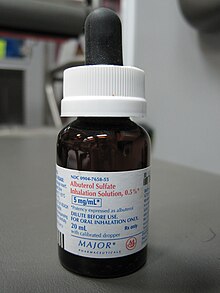 A vial of 0.5% albuterol sulfate as inhalation solution for nebulizing.

The medical company [Boehringer Ingelheim] also invented a new device named Respimat Soft Mist Inhaler in 1997. This new technology provides a metered dose to the user, as the liquid bottom of the inhaler is rotated clockwise 180 degrees by hand, adding a build up tension into a spring around the flexible liquid container. When the user activates the bottom of the inhaler, the energy from the spring is released and imposes pressure on the flexible liquid container, causing liquid to spray out of 2 nozzles, thus forming a soft mist to be inhaled. The device features no gas propellant and no need for battery/power to operate. The average droplet size in the mist was measured to a somewhat disappointing 5.8 micrometers, which could indicate some potential efficiency problems for the inhaled medicine to reach the lungs. Subsequent trials have proven this was not the case. Due to the very low velocity of the mist, the Soft Mist Inhaler in fact has a higher efficiency compared to a conventional pMDI.[9] In 2000, arguments were launched towards the European Respiratory Society (ERS) to clarify/expand their definition of a nebulizer, as the new Soft Mist Inhaler in technical terms both could be classified as a “hand driven nebulizer” and a “hand driven pMDI”.[10]

The human-powered nebulizer (HPN) is designed to provide relief to patients suffering from respiratory diseases such as asthma, TB, or chronic obstructive pulmonary disease in areas with limited access to electricity. Invented in 2009 by a team of doctors from Marquette University, HPN uses a bicycle frame and pedals—each connected to a piston and some tubing—to turn liquid medicine into mist that flows directly into a patient’s lungs through an attached mouthpiece. Commercial nebulizers typically use an electric compressor to maintain their rate of airflow, but with HPN, healthcare workers achieve the same goal by pedaling the equivalent of 8 miles per hour.[11]

The most commonly used nebulizers are Jet nebulizers, which are also called “atomizers”.[12] Jet nebulizers are connected by tubing to a compressor, that causes compressed air or oxygen to flow at high velocity through a liquid medicine to turn it into an aerosol, which is then inhaled by the patient. Currently there seems to be a tendency among physicians to prefer prescription of a pressurized Metered Dose Inhaler (pMDI) for their patients, instead of a Jet nebulizer that generates a lot more noise (often 60 dB during use) and is less portable due to a heavier weight. However Jet nebulizers are commonly used for patients in hospitals who have difficulty using inhalers, such as in serious cases of respiratory disease, or severe asthma attacks.

Send your message to us: